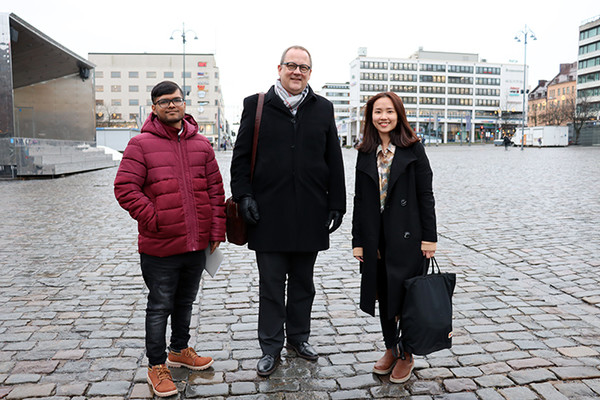 Arafat Molik and Tuyen Le (to the right) spent a day with Tomas Häyry, Mayor of Vaasa (in the middle).

Arafat Molik, an IT engineering student at Vaasa University of Applied Sciences (VAMK), has an idea: let us make electric cars more affordable and at the same time reduce the amount of petrol cars. This is not the first time he comes up with a solution related to energy efficiency and the environment: Arafat was part of one of the awarded teams at the Smart Technology Hub Ecosystem Challenge (STHEC) that took place at Wasa Innovation Center last November.

He and his team, Tuyen Le, Tarmo Kähkönen and James McDade, invented a remote monitoring system for ships and were awarded a day with Tomas Häyry, Mayor of Vaasa for their achievement, which Arafat and Tuyen were able to take part in.

The first event of the day was a meeting for Carbon Neutral Vaasa 202X, where Arafat expressed his concern over electric cars being out of the average consumer’s price range and presented an idea to solve the problem.

– It is possible to buy a decent petrol car for 2,000 euros but the cheapest electric cars cost as much as 20,000 euros. Here is my idea: a consumer purchases an electric car and gives their petrol car in exchange, while also receiving a decent discount on the purchase price. The car dealer replaces the car’s combustion engine with an electric motor and sells this converted electric car at a smaller price, Arafat explains his idea and continues:

– That way we could reduce the amount of petrol cars and simultaneously create a more affordable price range for electric cars. 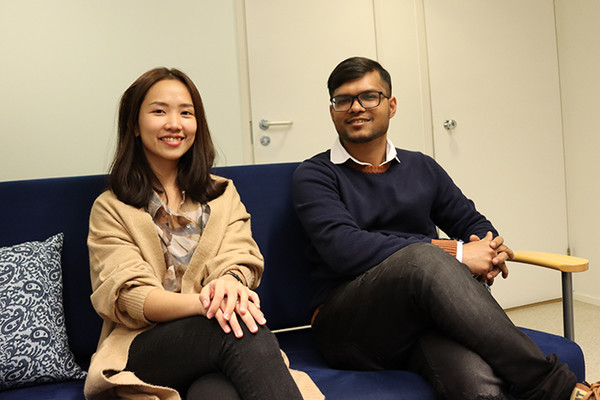 Tuyen Le and Arafat Molik are to graduate from VAMK in the near future. They both consider making a career in Vaasa.

Logistics Expert Riitta Björkenheim at Vaasa Region Development Company VASEK delights in young people voicing out their ideas on how to make the world a better place, piece by piece.

– This is just what we need: inspired future experts, who are not afraid to stand up, take the scene and say out loud what they think should be done, Björkenheim states.

Arafat and Tuyen are soon graduating from VAMK and they both consider making a career in Vaasa.